October 9 at 10:00 on "Inter" - the release of "Korisnoy Program / Useful programs" about what to look for when choosing a carp.

According to Chinese medicine, if you eat this fish, you will gain not weight loss, strengthen the immune system, to adjust the digestion, improve eyesight. Behind the scenes, the project star guest talk show, People's Artist of Ukraine Olga Sumy I shared with readers Bun proprietary recipes for this fish.

«Carp - is love since childhood - said Olga Sumy. - My father, Vyacheslav, Sumy, was not only a national artist of Ukraine, but also an experienced fisherman. And I used to take me fishing. Caught perch, river carp, Karasik and other fish. I remember one night Dad caught a carp weighing 12 kg. And in the morning I discovered that the monster - the one occupied almost the entire balcony. Then this Rybina parents fed not only their children, and the whole troupe.

Since childhood, I remember my mother baked carp with vegetables - so far this is my favorite dish. carp meat is very tender and juicy, besides diet, rich in vitamins and trace elements. And if it is baked in a tomato or cream sauce, it turns out excellent taste!

Carp on a bed of vegetables 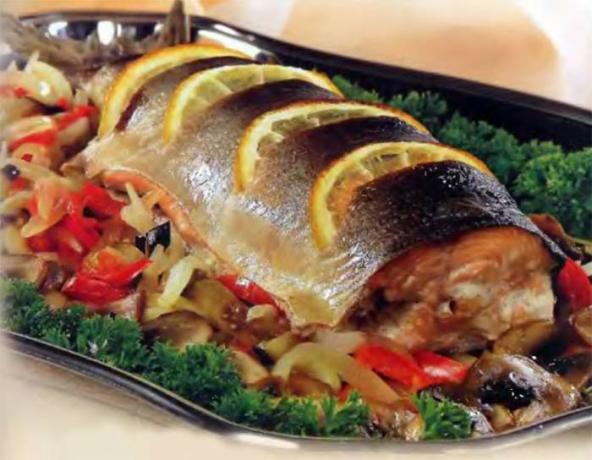 Fresh vegetables we shall cut into strips and mix.

Carp peeled, gills and eyes, srezh upper fins. We make an incision on the back. Abundantly polem lemon juice, sodium salt and pepper inside and outside.

We shall rub the skin with salt and pepper inside and outside, and inside carp invest some vegetables.

Put on a baking foil, put a pillow on top of the vegetables in the form of carp. Lay the fish on the vegetables, bay leaf on top decompose. Pour cream or olive oil.

Shall warm oven to 180 degrees.

Time roasting fish 40-50 minutes. To get a crispy and crunchy peel open the foil and pour the juice formed during frying. 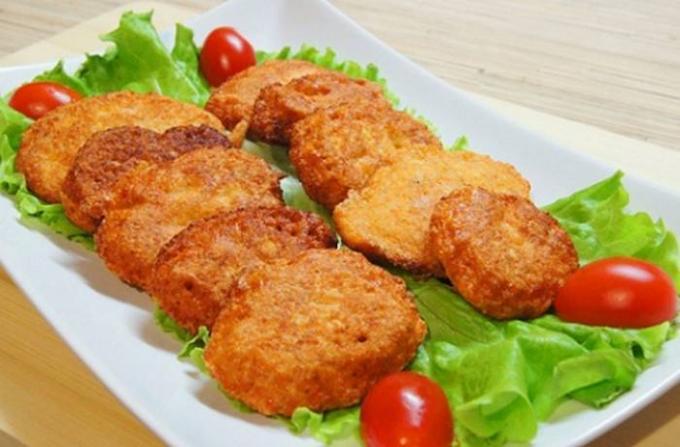 Clean and can cut onions and carrots. Browned in a pan on olive oil.

We take a big carp, cleaned from the innards, cut off his head. We make an incision along the ridge and go down along the bone, separating the fillet. Remove the fillets from the skin, remove large bones.

Grind fillet powerful blender and scrolls 2-3 times in a meat grinder with onions.

The fish mince add remaining ingredients: chopped dill, lemon juice, salt and pepper, to drive the egg. All stir and put the stuffing in the refrigerator for half an hour to stuffing compacted.

Form the patties and fry in olive oil on both sides until golden brown. Then camouflage cover and over low heat bring to a readiness for 5-7 minutes.

The most delicious ear is obtained from fresh fish, not subjected to freezing. From the head, spine and tail on low heat cook the broth. So he turned translucent, add at the beginning of cooking together with the fish head of onions and carrots. To prepare the soup use traditional spice black pepper or pepper blend, bay leaf.

carp fillet grind in a blender, add it to the egg, salt and pepper. Stir.

We obtain from the fish broth everything cooked in the broth, and the broth itself filtered. The fish broth prepared by the ship potatoes, onions and cook another 10 minutes.

Of minced fish teaspoon form the dumplings and send them into the boiling soup. Cook for another 5-7 minutes until tender.

Before use, the plate with the finished soup put a slice of lemon and fresh herbs.

See "Korisnu programa" on "Inter" and all savory!

Learning the wisdom of tying shoelaces

Tying shoelaces - one of the first steps on the...

Early signs of autism in a child: how to recognize the features of development

Autism - a disorder that is characterized by se...