Every year, the biggest children's festival "Black Sea Games" invites to the stage of popular singers and presenters. This year has been a guest star Olga Cybulski.

Kolobok.ua journalists talked with the leading Ukrainian singing and learned from her what talents she sees her child, as well as how to handle busy parents with a sense of guilt when they often have to leave the child at her grandmother and grandfather. 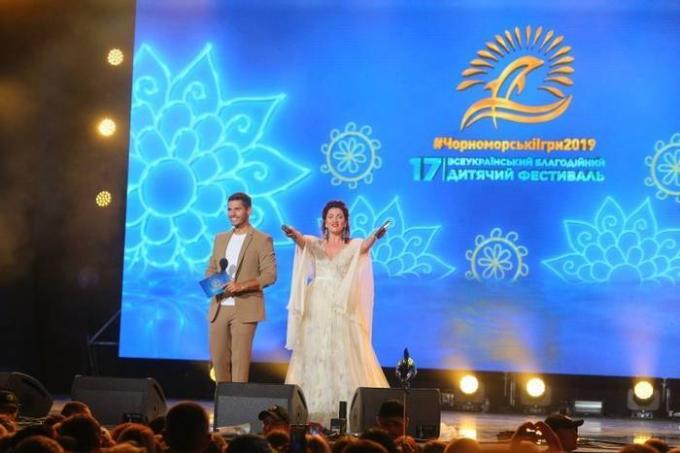 At the festival "Black Sea Games" are the kids, you also have a son, do you see it on the stage in a few years?

When I taught for four years in a variety-circus academy, saw absolutely unfortunate children whose parents bring to the stage and just tried to implement due to the child's dreams. The child does not need the power of music to drag. He dolzhet stretch himself.

Nestor in his four years plays drums, he is interested in music, he looks "Black Sea Games", I shed a video where he dances around the TV screen. Estrada should be calling, then you are ready to put on the altar of all that you have. Then will be cheering, fans and winning.

While you — on "Black Sea Games", who looks for Nestor?

He was with his grandparents.

You want to ask whether I feel bad mother? Yes! I - a bad mother! Because my child at home, I'm here. Now I could play with him. If you want to be the cool mom who still has time, you have to be cool and grandparents. Thank God I have them! With her son two days, we are not together. But we all catch up. Monday and Tuesday I will be just him and a big draw.

As parents, who often leave, to cope with guilt?

Parents clearly need to ask yourself: "What would I do now?" Then they will get a clear answer. If they have goals, they should not torment the conscience.

You will also be interested to know Elena Ivashchenko admitted that she experienced on the stage of the Black Sea Games.

Shoes in the wardrobe of any woman take pride o...

7 signs of a decent person. How few are left

Who is a decent person? This is the one who alw...

Muscle burns, not fat: Why sports on an empty stomach are dangerous

If your heart hurts after exercise, this is the...