Top 5 autumn entertaining games for children in the yard

Kwacha or hide and seek? Who has not played in the yard? Simple rules, minimal props and the opportunity to have fun virtually any company doing such fun real hits

Today, children in the street have something more interesting conventional dogonyalok. Wake up your memories, tell the children about what you were playingWhen they were young. Diversify your summer walks. Unpretentious street fun left in the shower baby indelible memories of carefree, fun, easy, and absolutely happy childhood.

Designate a small circle (you can draw a chalk stick on the ground or sand to lay out a rope) - it will be a vegetable garden. The diameter of the circle determined from the number of participants and children.

At the middle of the circle, each of the kids to put some kind of a subject (cap, toy, hair clip), and can be put in terms of small toys, gifts for children. This cabbage. The leader guarding the garden. According to the team (this may be a short poem, a line from the lyrics) players try to run in a circle and drag the cabbage, not hitting at the same guard.

1 times can be taken only 1 subject out of the circle. The winner is the one who will carry off with more cabbage garden. Players who are caught watchman may drop out of the game or move to the side of the guard and help him catch the nimble rabbits - how to negotiate. 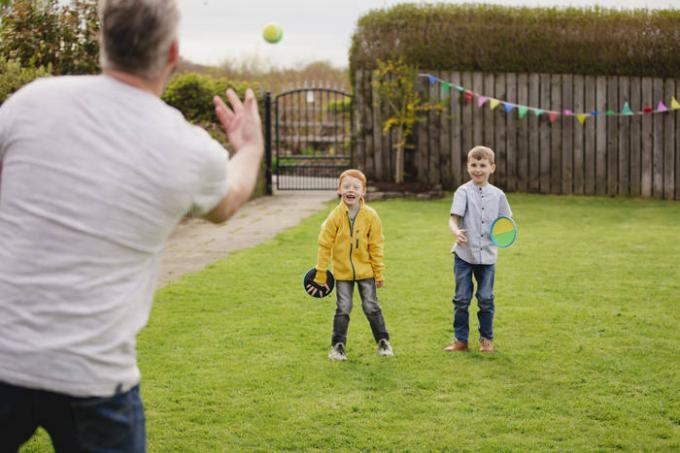 Top 5 Autumn games for children in the yard / istockphoto.com

This game can venture and on the playground, and in an alley in the park. You must select and mark houses of driving the number of participants minus 1. Houses can become trees, benches, painted chalk circles, beach towels ...

Players take place in houses and begin to cross the signal from one to another, and vodyaschy should try to occupy any vacant house. Anyone who has not got a house, becoming a new driving. You can play the knockout, then in each circle is the one-track player out of the game with his house, that is, the houses should always be 1 less than the child. 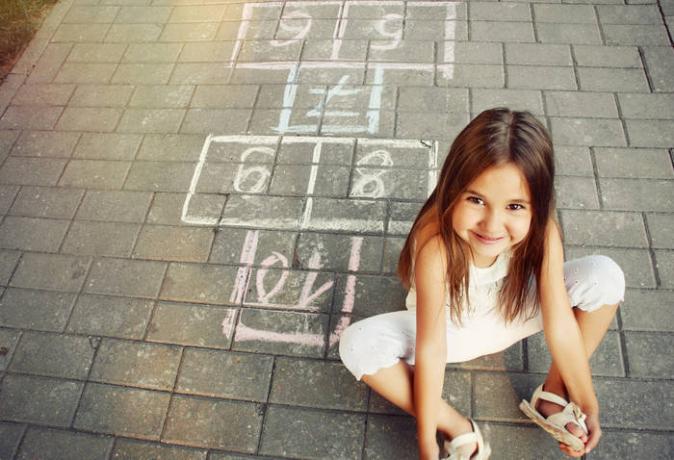 Top 5 Autumn games for children in the yard / istockphoto.com

We denote the road a few meters wide. The leader stands in the middle of the track back to the players, the players - for the road line. The leader calls the color and turns to face the play.

Those who have called on the clothing color, holding the clothes, quietly crossing the road. Those who do not have the same color must run across the track and vodyaschy trying to stop them. Stopped player becomes new driving. If all players safely crossed the road, leading once again turns and calls the new color. You can come up with color (gray-brown-crimson) and call tones (light purple, dark blue).

Mark a circle on the ground and put it in small stones (or cones, chestnuts) to 5 pieces per player. Flat rock more (or stick) will bat. Players take turns throwing the bat in a circle, trying to dislodge pebbles beyond. All stones, found themselves outside the circle, player takes. The winner is the player with the most stones.
And the stones, pine cones, acorns, you can throw in a painted on a wall or ground targets (and award points depending on which sector target hit) in the container (buckets, cans), in dug in the sand pits, stones knock spaced cups, tins sandbox kulichiki. Such simple games easily captivate children develop persistence and good eye.

To play the game you need to collect a few (10 pieces) of flat sticks about the same size and place them on the hill ground. Players take turns pulling out of the hills on one stick so as not to hurt the other sticks. For each elongated wand A player gets 1 point. If it is touched (stirred, dropped) other wand, glasses for the course are not charged. The winner is determined by the number of points.

Also you will be interested to read this: Top 5 games on the sound perception for the little ones

As it is impossible to measure the pulse

Hair stylist "Fashion sentence": haircut, which I do not recommend women with thinning hair