Where to go for the May holidays: TOP-7 castles of Ukraine

On the May holidays with children, touch the history and visit one of the oldest castles in Ukraine. A selection of the best preserved castles

May holidays - the best time to travel around Ukraine with children. There is still no stifling summer heat that often interferes with children on trips and spoils the mood of adults. But nature has already blossomed in full force and pleases with fresh greenery and flowering trees. True, this year weekend tourists are a little let down by the weather: the beginning of May with all the following weekends promises to be rainy and cloudy. However, this is not a reason to stay at home. In bad weather, you can shift your attention from natural to man-made beauty of Ukraine. Arrange a fairy tale for the children and show them ancient castles. This trip will definitely please your little knights and princesses. The list starts with the castle, which is officially classified as the "Seven Wonders of Ukraine". I must say that this is not just a castle, but a real fortification. The first mentions of the fortress are found in historical sources as early as the 11-12th century, but the main construction work began in the 14th century. For five centuries, up to the 19th century, this fortress was a military building, survived many enemy attacks, passed into the possession of Poles, Russians and Turks. Now it is a cultural monument, a historical reserve, a popular museum and a location for various festivals.

There are a lot of interesting things in the Kamenets-Podolsk fortress. Firstly, the building itself - it is well preserved, and at one time it was carefully restored. So the appearance of this miracle of Ukraine conveys the atmosphere of the past as much as possible. The fortress has as many as 11 towers, each of which has its own amazing history. There are several museum expositions in the Old Fortress: for example, the boys will definitely like the exhibition of medieval weapons. And at night, unusual excursions are held here, which are more like theatrical performances.

Lake Bakota of unique beauty is located 50 km from Kamenets. So feel free to go to Kamenets-Podolsky for 3-4 days: you will definitely have something to do. 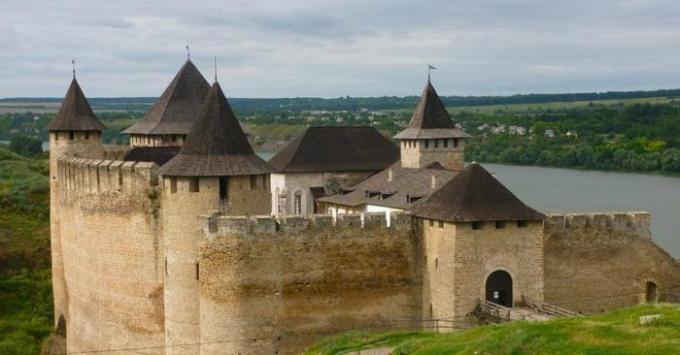 This large-scale and ancient fortification is located in the city of Khotin, Chernivtsi region. Previously, this small town stood at the intersection of trade routes and was a tasty morsel for various invaders. At one time, Turks, Russians and Poles encroached on him. Therefore, at the beginning of the 11th century, Prince Vladimir the Great began here the construction of the first, then still wooden fortifications. Over the centuries, the fortress was rebuilt, destroyed, rebuilt. The last work on the reconstruction of the fortress was carried out in the 18th century.

Now the Khotyn fortress, along with Kamenets-Podolsk, is included in the list of "Seven Wonders of Ukraine" It is well preserved and is a truly majestic and monumental sight. Suffice it to say that Three Musketeers, Zakhar Berkut and Taras Bulba were once filmed in this fortress, so that you can make sure that there is really something to see here. 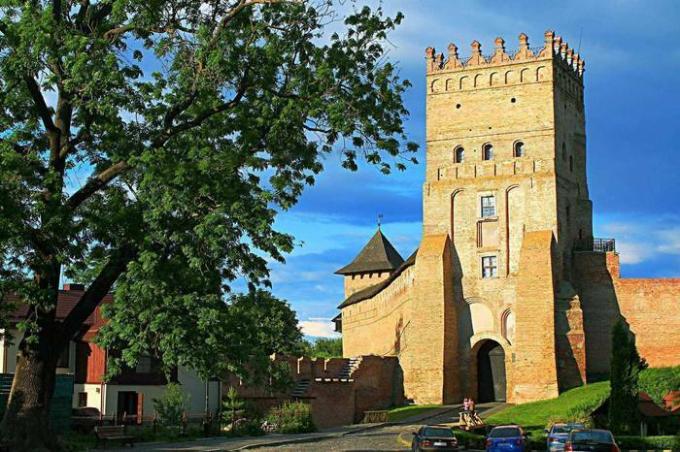 Lubart's castle was one of the nominees for the "Seven Wonders of Ukraine". And besides that, it is considered the “visiting card” of Volyn and is part of the state reserve called “Old Lutsk”. This amazing architecture and large-scale castle was built in the 14th century by order of the Lithuanian prince Lubart. Initially, the complex consisted of two buildings: the Upper and the Okolny castle, but from the latter to our times only ruins have survived. But the Upper Castle has been preserved in all its beauty. Today on its territory there is a museum of bells, a museum of books, an exhibition of ancient weapons, an exposition with instruments of torture in the underground.

Rumor has it that a ghost lives in Lubart's castle. This is the ghost of a woman whom the commandant of the castle once fell in love with. The woman refused him, and in anger the commandant ordered to chop her to pieces. Since then, her soul does not find rest and wanders through the castle corridors. You are unlikely to be able to meet a ghost on an excursion. But you can look for funny whoopers on the streets of Lutsk - these are bronze figures of men, which have been installed in Lutsk since 2015 and are considered one of the symbols of this old city. Your little travelers will definitely love the quest excursion in search of whoopers. 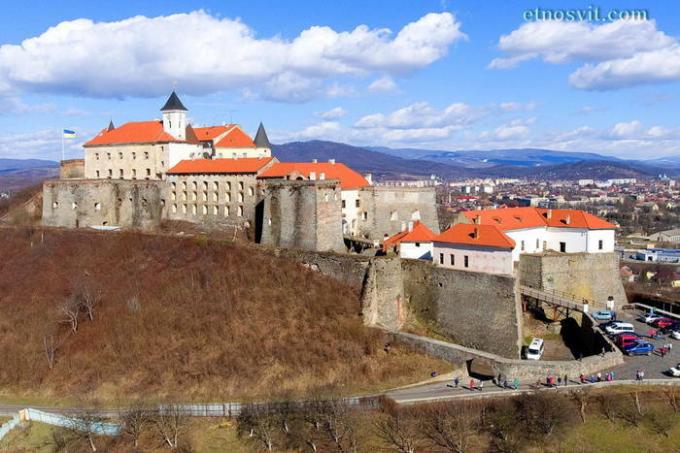 The most beautiful fortress on the mountain in the city of Mukachevo (Transcarpathian region) was once the residence of the Transylvanian principality. Events of the international level took place here: rulers met, treaties were signed, wars were declared and started. Since its construction (according to various sources, in the 9-12th century), Palanok Castle has withstood many assaults and sieges, but has never been captured by opponents.

The castle acquired its modern look in the 17th century, and has preserved it to this day in excellent condition. Due to its medieval beauty and romantic atmosphere, honeymooners and photographers love it very much. The shots here are really great and by the way, right on the territory of the castle you can rent old dresses and costumes to capture yourself "in character". You can learn about the history and legends of the castle from the guides: today the Mukachevo Historical Museum is located in Palanka. 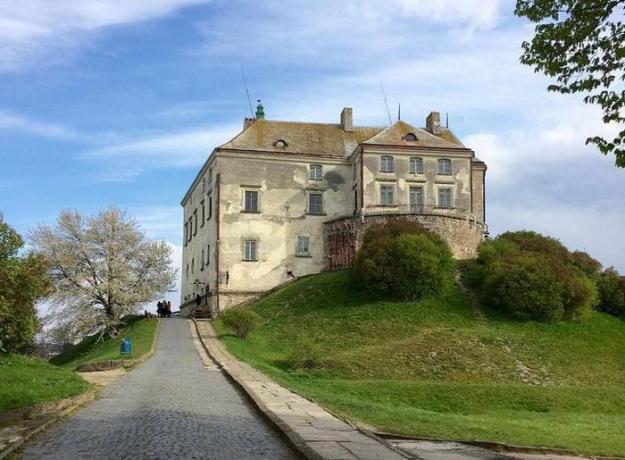 Another nominee for getting into the list of "Seven Wonders of Ukraine" is located in the village of Olesko, Lviv region. Olesko Castle was built in the 1st-4th century as a barrier on the legendary Black Road, along which the Tatars attacked Ukraine. In later times, it became the border line between Poland and Lithuania, a strategic outpost in front of Galicia and Volynia. Therefore, the Olesko castle was destroyed many times. It has survived to this day in the performance of an Italian architect who reconstructed the castle in the 17th century as the residence of the Polish king Jan Sobieski.

Now the Olesko castle is included in the famous "Lviv Golden Horseshoe" - a list of castles that are considered the historical heritage of the Lviv region. Of the four main castles of the "horseshoe", it is the best preserved due to the fact that the museum-reserve of the Lviv Art Gallery was opened there in the last century. Another object of the "golden horseshoe", which is in good condition today, is the Zolochevsky castle. But the Podgoretsky and Svirzhsky castles are in need of reconstruction, so inspection there is possible only from the outside. 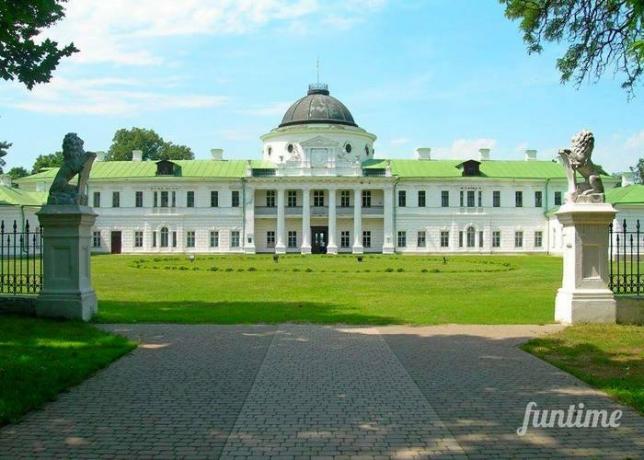 This castle is located in the village of Kachanivka, Chernihiv region. It does not look like the ancient fortresses of the past, and more resembles a magnificent palace residence. The foundation of the building was laid in the 18th century by the owner of a local farm. Since then, the territory has changed hands several times, and each of the new owners added something of their own to the estate. The castle acquired its modern appearance, placed in the hands of the aristocratic Tarnowski family. They brought the building to a common architectural denominator in the style of late classicism, expanded and deepened the park area and created a real palace and park complex on the site of an ordinary manor.

The Tarnovsky estate (also called the Kachanovsky castle in memory of its creators) is one of the few complexes that has come down to us intact in full. Now the National Historical and Cultural Reserve "Kachanovka" is located here. It is fashionable here not only to walk and enjoy the beautiful architecture. The castle constantly hosts an exhibition of ancient Ukrainian icons, a museum of household items and samovar production. By the way, fishing is allowed in the lakes of Kachanivka, so cultural recreation can be combined with a picnic in nature. 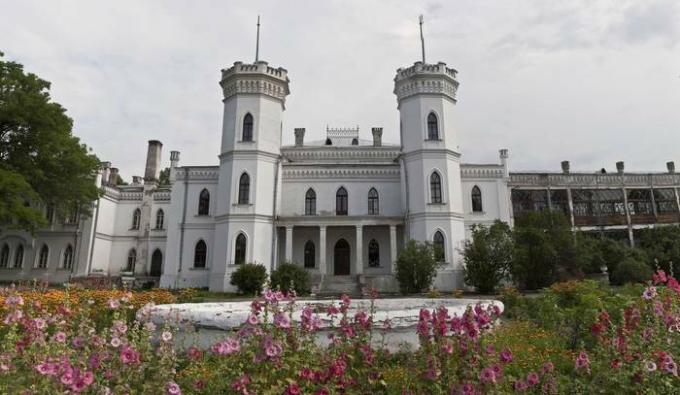 One of the "youngest" castles on our list is located in the village of Sharovka, Kharkiv region. It is not called a palace for nothing. This white-stone and airy structure was built in the 19th century for beauty, and not for the purpose of fortification. The Sharov Palace was originally a landlord's estate, and then became the possession of the largest sugar manufacturer at that time, Leopold Kening. Koening supplemented the structure and territory of the castle with Gothic towers, alleys, terraces, a cascade of ponds, stone bridges and fountains.

Today the palace complex in Sharov is a wonderful place for walking. True, the territory looks abandoned in places: due to funding problems, the reconstruction was done only in the palace itself, without affecting the park facilities. Nevertheless, here it is quite possible to enjoy the aristocratic spirit and even make a wish at the Stone of Love.

May holidays 2021: when and how many days off

Where to go to May with children: TOP-5 of the most beautiful places in Ukraine

Where near Kiev to relax on the May holidays: TOP-6 recreation centers

8 signs of a wise woman

Cake with orange Kurd and sour cream, which melts in your mouth

My with a pink biscuit experiment It is still a...

Which sport effectively extends the life of 5 years?

Danish researchers from Copenhagen conducted a ...