The child does not say how to help him. Effective Tips Dr. Komarovsky

Each child has their own pace of development. Already from many modern books that the word "should". However, the child has been 1.5 years, but he does not say so far? How to help your child, suggests Dr. Komarovsky

Parents worry if their baby does not to speak, Not only words, but also phrases, sentences. How to help your child to speak and what it can do parents suggested pediatrician Eugene Komorowski.

What if the child does not speak: Top 7 solutions

1. Describe and give voice to all that the child sees, hears or feels. Do not think that you will look silly talking to those who do not understand you. baby's brain absorbs it parents and forms necessary for the future of speech neural connections. He still does not really understand the words, but met with the sounds of his native language, intonation and absorb all that is deposited in the treasury of a future speech.

2. Ask questions. And it does not matter that pipsqueak still can not answer them, and not even aware of the meaning of the question. But he hears the tone change and thus meets with the mother to him and his parents' language. In a short time, and you did not notice, as a child learns to clearly distinguish between the question mark

3. Tell stories, dream. You can talk to the kid about anything, for example, about his childhood or his toys to invent adventures. The more different words, the better to motivate the kid to talk. Perinatal psychologists believe that children perceive and absorb it while still in my mother's belly.

The child does not say how to help him. Effective Tips Dr. Komarovsky / istockphoto.com

4. Be positive. Emotionally saturated it unequivocally positive effect on children's perception. Talk with the child emotionally and maximum fun, do not forget to smile.

5. Avoid baby talk. Despite the temptation, try not to lisp with a child. In simple terms, but normal words as an adult - you do not know where the crumb will begin to understand your words, it can happen unexpectedly early. Thanks to your conversations baby develops basic units of language and the laws of their functioning. 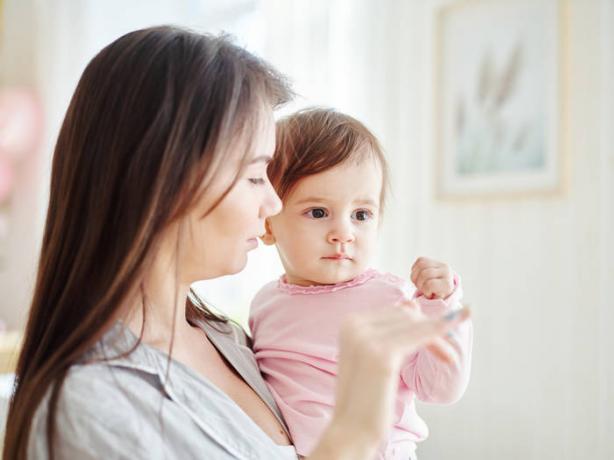 The child does not say how to help him. Effective Tips Dr. Komarovsky / istockphoto.com

6. Motion. Not necessarily waving his arms, but the non-verbal communication is no less important than the actual conversation. Employing body language, you will achieve that a child before you begin to understand.

7. Shut up and listen. Do not forget to periodically stop his monologue and listening, what sounds utters baby back - it is very important not to miss the baby's attempts to pronounce the word, or bind them in offers.

Girls usually begin to speak earlier than boys, but later learn the phrase, because so try to speak correctly and in an adult. Later start talking children who lack motivation - or nobody listens (lack of attention), or all his desires fulfilled, and without explanation, too fast (overprotection).

Also you will be interested to read this: Does your child need strict parental control and overprotection

There are many suggestions on the Internet that...

Doctors call common pathology in children who have had COVID-19, even without symptoms

How to understand if mold on the walls is harmful to the health of family members?

Mold not only looks bad and destroys furniture,...