Anna Gres on pregnancy: I was very afraid to become moody or nervous

For all time of pregnancy Anna Gres Not a care in the decree, and has managed to select the hospital, and even take part in the concert "Mamahohotala".

Actress in an exclusive interview kolobok.ua talked about preparing for childbirth, choosing a name for the baby and how to change its preferences during pregnancy.

Anya, how are the final preparations for the appearance of the firstborn in your family?

Final preparations yet, as long as the first and not started. Now there is only a pack of diapers and a couple odezhek. I'm not in a hurry with this, what's the hurry? But the plan soon to address this issue.

You've already chosen a name for her son? whether the disputes were with her husband in this regard?

Finally decided on the name after the new man will be born. As long as there is one in mind. Controversy until it was, let's see what will happen next.

You have decided on the hospital in which to give birth? What indicators are taken into account when it is selected?

I plan to give birth in the state the third hospital. He is not far from the house, in the same stand registered in the antenatal clinic. There's also gave birth to two of my friends and were satisfied. I do not want to give birth in private - I see no reason to pay so much money. I do not have high demands, and in public hospitals work the same good people as in private. 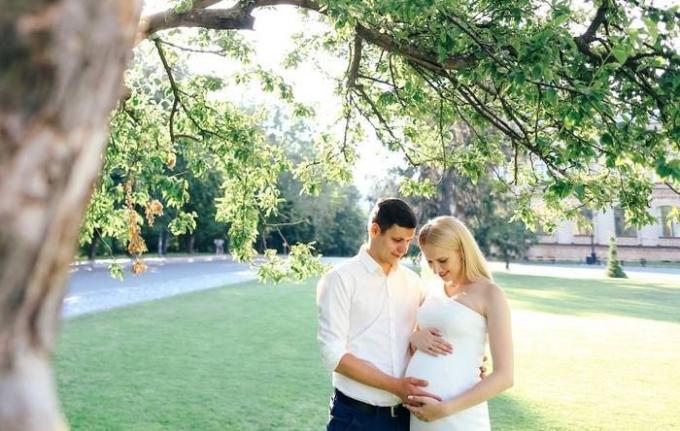 How about the birth partner - as is acceptable to you with the husband such a format?

I would like to, that her husband was present. Roma (Roman Grischuk - the ex-head of the studio "Mamahohotala" - Ed.) Has not yet decided. I think everything will be decided upon.

How many kilos you gained during pregnancy?

So far I gained 10 kg. The food itself is not limited. And call in at McDonalds, and drank coffee and ate sweet. I (pah-pah) only big belly, rest of the body at a normal weight and shape. I hope to return to the previous form and the weight does not take much.

Have you had any problems with the choice of clothes for pregnant women? Where usually buy clothes at this time?

Old wore knitted dresses (I have a couple of different pieces) and bought two sports suit for pregnant women: the summer and insulated. I still have enough of this. I'm not a shopaholic, I have a basic wardrobe, and it suits me. But the interest of looking that offer to buy pregnant. Usually clothing or expensive, or ugly, or expensive and ugly.

Changed if you tastes and preferences during pregnancy?

I drank liters of orange juice, especially in the first trimester. Some quirk like "I want to lick the rails" at three o'clock in the night it was not. There are "for two" is also not start. Normal diet and portions - all without fanaticism. 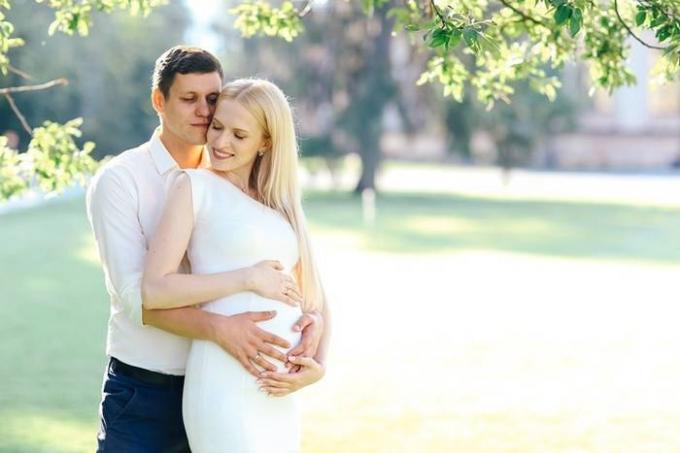 You can say that during pregnancy you become more moody or nervous?

I was very afraid to become moody or nervous before pregnancy. I worried that will go mad and will throw at people. But that did not happen. Even more it seems to me that I have become more balanced and calm, found some Zen. Although some people still enraged.

Once for all time, there were tears for no reason: has wound herself, she cried, she calmed down. And it was a two-day aggravation of stupidity. For example, people could not remember (with whom close contact) and forgot once, as shown in the figure of the three fingers. Then it passed.

You are planning to go on maternity leave? How soon will return to participate in the show "Mamahohotala"?

The latest edition of the show was filmed on October concert at the "October Palace" also plan to be. While on maternity leave I do not intend to. We have the same design work - it's not Monday-Friday. I want to combine. But we will see when the baby is born. I will build on its temperament.

What you want to be a mother to her baby?

If you like the smell of powder and expensive c...

How to remove dandruff from hair: TOP 4 folk remedies

Siberian spa: what is interesting about cosmetics from the Russian brand Siberian Wellness?