Andrew Burym: My children - the best that I got

He, like anyone else, are aware of all the difficulties in dealing with a new generation. Andrew told what it is - to be a father, an actor and producer, and what rules he followed in the education of children.

Andrew, what principles in parenting do you practice?

the principles of nonviolence and love - is the most important thing. Other principles are derived from this. I can not say that I am not a strict dad. But I'm working on an order to not hurt the children. I am categorically against the power of education - it is not even considered in my case. When my son was very young, he knocked once the girl's forehead. I'm for it hit him in the ass. And then I was sick for two weeks - I was so disgusted by the fact that I did it. Then I did this nonsense of the old Soviet habit, when you need to talk. About her daughter - there is not discussed. It is like that himself cut off his hand.

In the family, you play the role of an evil or a good cop?

My wife and I agree. You know, we'll just see who has assumed the role of evil, while the second is automatically good. The main thing here - not in any way disagree and bending line. Even if you think a thousand times, that your wife is not right - you're bound to support it! 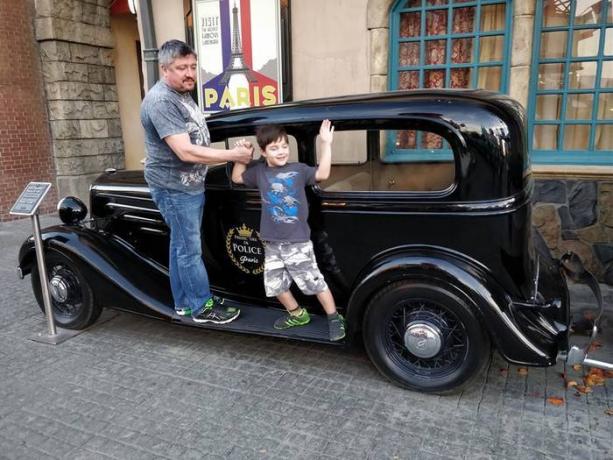 How do you bring up his son - by example, or there is a format that you're trying to stick to?

Concerning education - this is a difficult question for me, because I am a teacher by profession. Paradoxically, I interfere in the process of education. Thought "what next?" Or "I did everything right?" Are constantly coming. I'm just trying to raise a child, so that he was better than me at the time. But, without imposing anything. He wants to play, for example, let him play.

What is the main task of the father in a child's education?

To keep him healthy mind and raise a child in love. Also, to protect him, but do not try to protect everything that can harm even minimally. I'm a little paranoid in this sense. I am most worried In our family, that something can happen - the wife of a calm and stable.

What do your kids say about movies and TV shows with your participation?

My first episode daughter looked and said: "Well, nothing, Dad." And in the third series, it was ready to act. Given that she is a professional actress, it was for me the highest praise of all.

Your children like to read, or do you make them do it?

I understand that the world is, of course, has changed. Unfortunately, the era of reading books left. This does not mean that no one reads, just now the flow of information takes people with such speed that read simply is not enough time. I am sympathetic to the fact that children do not read much (although my eldest daughter, in contrast to all modern tendencies reads very much). But when my youngest son, he will want to check out something worthwhile, and come to me for advice, I'm happy to recommend it to the book. What better way to spend time with the kids for you?

The best way for me - to spend time outdoors, in joint trips or hikes. Once we were on the march with my friends and my son where he was constantly sick. When we were leaving, I noticed that the farther we drove away from nature, the more joyful and become my child. When approached to Kiev, my 6-year-old son said: "You know, Dad, I realized the campaign - it's not mine."

As far as possible, I try to spend more time with their children. I know that there is no ideal method of training. The main thing that education was not indicative, when there is only an appearance in public. Another thing I can not stand when the parent on the playground screaming at the child, destroying his personality in front of friends. Only the development of systems of children can be achieved by such methods.

I believe that my children - the best thing I did. This is the best of all my activities and achievements. My children - what makes life worth living. We all understand that they grow up, go away from us, and it is not known at all, as there will be life. I believe that man is created in order to continue life and it's great.

Stomach cancer: how to identify the disease at an early stage? 00

In the initial stages of stomach cancer is diff...

The spread of cancer: impact of vitamin E

Basic research all say more and more often that...

Human life is so interesting phenomenon, that t...